Manda Mosher's latest video for Nobody Gives A Damn About Songs Anymore.

From her first solo album on, Manda Mosher’s songs have always shimmered with pure rock & roll soul as channeled through a singularly grounded American Girl, inspiring one writer to dub her the “female Tom Petty.” That’s high praise, but she carries it well.

An award-winning songwriter, recording artist, multi-instrumentalist, touring musician and entrepreneur, she was baptized in the river of real-time rock & roll, and has never abandoned that spirit. Like Tom Petty, her idol, she’s radiated a reverence for the purity and artistry of great songwriting and record-making since the start.

A full-fledged California girl, she’s a sixth generation Angeleno raised on music. With her father on flamenco guitar and her mom singing, she swiftly mastered ukulele, guitar, and harmonica. Songwriting came early, and never stopped. Following high school, she attended Berklee College of Music in Boston, where she studied music theory and composition.

Back in L.A. and armed with her ever-expanding songbook of originals, she began recording what became her critically acclaimed debut, Everything You Need and its follow-up City of Clowns. Both garnered a bounty of rave reviews and established Manda as a seriously gifted songwriter and charismatic live performer. She won many L.A. Music Awards, including Female Singer-Songwriter of the Year, and National Touring Artist of the Year. She was a 2009 official SXSW showcase artist, a 2010 official AMERICANAFEST showcase artist and her songs have appeared in many films and television shows, including the feature film Please Stand By, and CBS’s “NCIS: Los Angeles;” she also performed on CBS’s “The Late Late Show.”

In 2012 she took a break from solo work to launch California Country Records and to form the female-fronted California Country/Americana group CALICO the band. With heartfelt songs, beautifully close harmony singing and rich musicianship, they made two landmark albums, Rancho California and Under Blue Skies. The group toured extensively through the United States and the UK, including the Stagecoach Country Music Festival in 2014 and 2018, and as an official AMERICANAFEST Showcase Artist in 2015 and 2017. They won several awards, including Americana Album of the Year at the L.A. Music Awards, and Best Country Band at the L.A. Music Critic Awards. Their songs were heard in the feature film Walk of Shame, as well as in NBC’s “The Nightshift,” and the Netflix original series “The Ranch” with Ashton Kutcher.

In 2016 Manda co-founded the annual California Country Social at AMERICANAFEST in partnership with The Alternate Root Magazine in order to provide a platform for West Coast artists on her own California Country Records. Over three consecutive years, it hosted over 45 artists, including Sam Morrow, Rod Melancon, Ted Russell Kamp (Shooter Jennings), CALICO the band, Alice Wallace and many more.

2019 will see Manda launching The California Country Show at AMERICANAFEST with the aim of “spotlighting California-centric country and roots artists alongside our artist friends in Nashville.”

Now back on her solo journey, she seems positively liberated, rocking some of her strongest material yet. With long-time partner, A&R executive and music supervisor Eric Craig in tow, she’s established a new record company, Blackbird Record Label, an apparel company, California Country Apparel, and built a new recording facility, San Fernando Valley Recording. It’s there she’s been busy writing and recording some of her most powerful and poignant music to date, as well as cutting tracks for her next album. These include the delightfully visceral alt-Americana track “Fast As I Can,” which resounds like a timeless rock classic, as does her passionate reworking of John Moreland’s classic “Nobody Give A Damn About Songs Anymore.” Originally intended as a song to record with CALICO the band, it’s been reborn with impassioned harmonies by Craig and resounds as fervent proof why songs still matter and always will.

Wedding her tuneful, heartfelt grace with a raw and timeless urgency, Manda’s making new music ideal for these dissonant times. She’s calling it alt-Americana. Invigorated by the unbound promise of this new sound, she’s been beaming that electric Manda smile.

“We made a promise to ourselves,” she said, “that we’re not going to polish off the sharper edges.” Wherever her music leads her next, Manda is a musician of multitudes, and remains one of L.A.’s most luminous musical artists. Long may she shine. 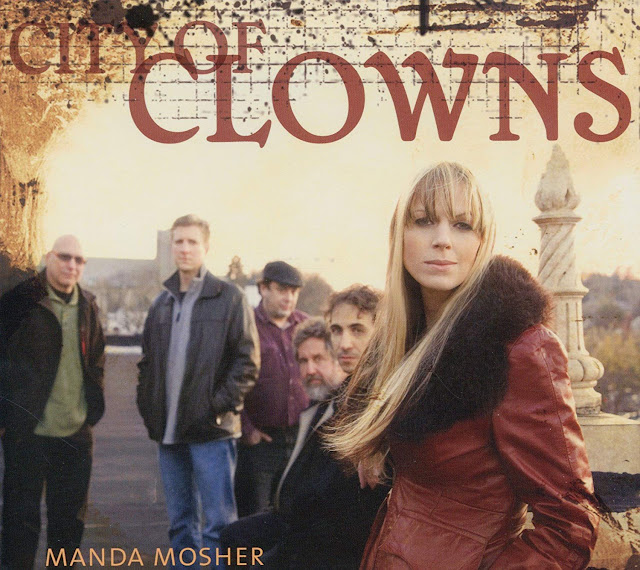 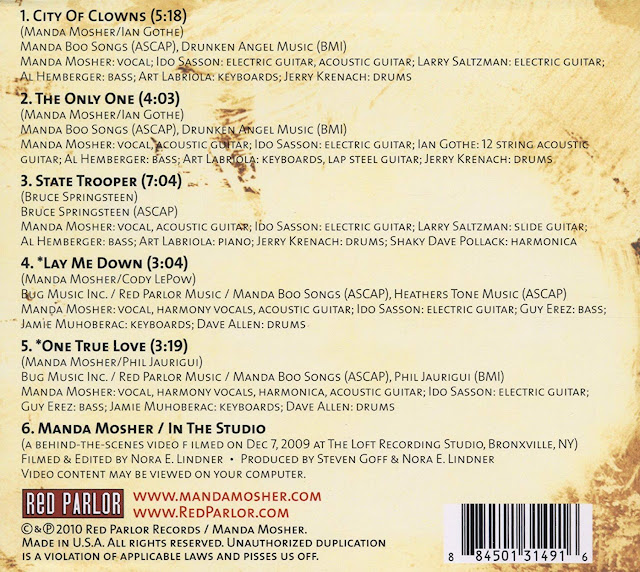 Manda Mosher's debut album Everything You Need received national critical acclaim, and airplay on over 70 radio stations across the US, including XM - The Loft and Acoustic Café. Since then she has been an ASCAP Featured Artist and performed on national television as a musical guest on The Late Show with Craig Ferguson.
Paul Zollo of American Songwriter Magazine wrote, 'Beautiful, compelling melodies with poignant lyrics sung with a sensual, sultry authority...This is good, this is now.';
Mosher's new EP, City of Clowns shows her rougher, rock-roots with three new kick-ass songs including the provocative hit-single 'City of Clowns' and a stunningly edgy cover of Bruce Springsteen's 'State Trooper', plus an all-new gritty mix of the critically acclaimed 'Lay Me Down'. This enhanced EP also includes a special, three-minute behind the scenes look at these recording sessions.

Manda is poised to become
a leading light of modern singer-songwriters, someone able to encapsulate the emotional terrain of life and romance with a soul much wiser than her young years. --Bill Bentley, Sonic Boomers 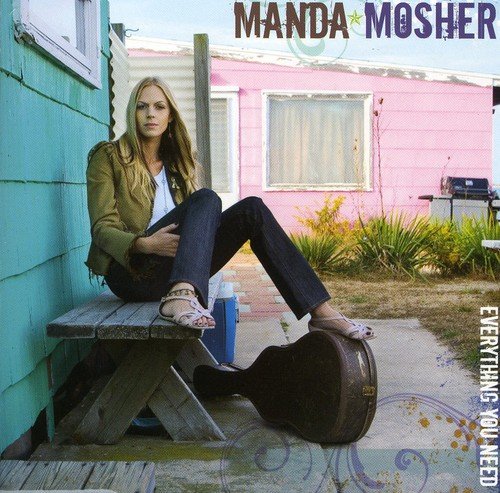 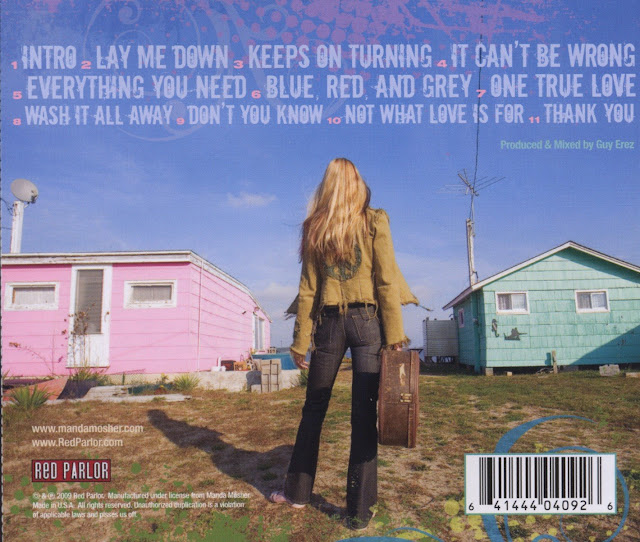 Manda Mosher's debut album Everything You Need received national critical acclaim, and airplay on over 70 radio stations across the US, including XM - The Loft and Acoustic Café. Since then she has been an ASCAP Featured Artist and performed on national television as a musical guest on The Late Show with Craig Ferguson.

The middle ground between spoken and sung that Mosher occupies gives the tales on the album (City of Clowns) the feel of secrets. She is letting us in on something that no one else knows. The songs on the EP are amped up, the kind of instrumental punch that makes you reach for the volume now because the existing sound waves are not coming through loud enough. --The Alternate Root

Beautiful, compelling melodies with poignant lyrics sung with a sensual, sultry authority... This is good, this is now. --Paul Zollo of American Songwriter Magazine


Manda is a great artist. She's the real deal and one of the only new female artists doing rock these days who can really sing. --Anita West of 97- Rock, Buffalo WBFO & NPR
Posted by Joe Tell's Music Blog at 12:27 AM

Labels: Calico the band, California, City Of Clowns, Everything You Need, Manda Mosher