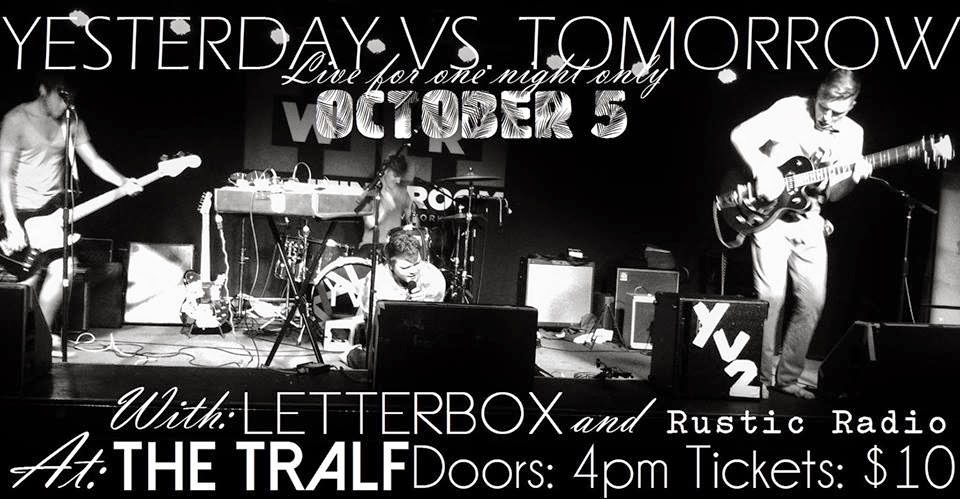 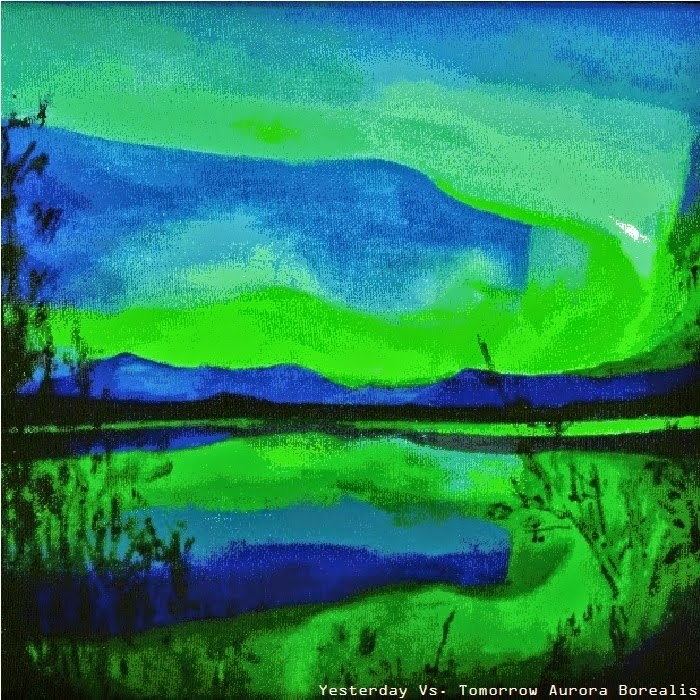 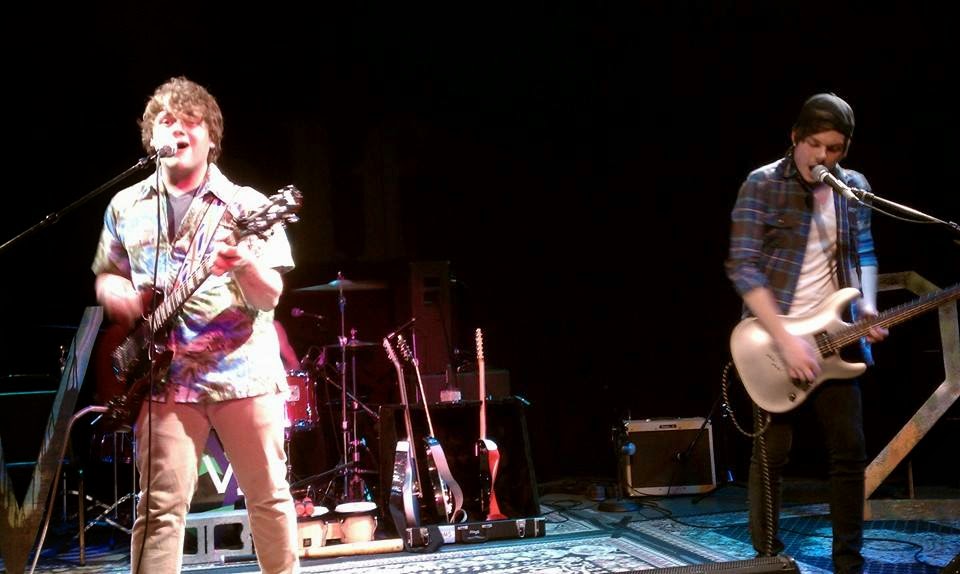 Onward and upward with the Aurora Borealis CD review!

Listened to "A Song For All My Friends" first thing today and I was drawn into the song by the mellow, spacy, guitar riff/vocal intro. The vocals, guitar and keyboard come together to create a great, atmospheric intro. The vocals come forward to bring the energy up and the drums follow suit slowly building and bringing in the rock and roll energy. The band uses elements of alternative/new wave and punk rock music to create a great rockin' sound. I can hear and feel the raw, energetic energy of the band in this song. This is my 2nd fave song on Aurora Borealis.
Song #16 proves that this band is creative enough and open minded when it comes to creating great, musical soundscapes together in the studio. With it's swirling sitar sounds #16 is a super neat intro for A Song For All My Friends.
"Steampunk Hero" as the song title would suggest, is a upbeat, high energy, alternative rock song. I was reminded of Jimmy Eat World when I listened to this song.
"Grey" sounds like a groovy, tropical vacation getaway song. Sweet percussive track coupled with a perfect guitar sound. Great background soundscape.
"Northern Lights" sounds like the soundtrack from a live, electrical generator. Electrifyingly great intro for "Pt. ii"...
"Pt. ii" sounds surprisingly like a song that could've come straight from the 80's. I grew up in the 80's so I like the new wave stuff that MTV used to play 24/7. Great atmospheric guitar track on "Pt. ii".
"Noise Color Excess" sounds like the intro for "Goodbye, Goodnight". The chaotic "Noise Color Excess" serves as the perfect intro for the melodic "Goodbye, Goodnight". The vocals of Jesse Kaufman remind me of Robert Smith from The Cure on this song. The saxophone is a great sounding addition to "Goodbye, Goodnight".
Who is this "Mark Rothko" guy anyway? He must be cool enough to inspire YVT to write a song, so he must be good people. Anyway "Mark Rothko" sounds like a perfectly mixed combo platter of U2 and Coldplay. This song must be killer when the band plays it live, with it's soaring vocals and powerful drum track.
"Sprawl Song Singalong" is a acoustic romp that is simply simple enough to get you to clapping and singing along.
"You Look Like Sunshine" sounds like a love song. The rhythm guitar is solid and the rhyming lyrics top of this song brilliantly.
"Local Millionares" sounds like a combination of 60's garage and surf rock. To be more specific Dick Dale with a splash of Devo and the B-52's. This is a cool rock track full of great guitar sounds.
"Astronomy" is up next, the intro is cool enough to me to be considered pink floydish. The guitar figure that comes in reminded me of U2. Once the entire band kicks in the song proves to be a good, mid-tempo, alternative rock song.
"Just Wait" is a slow one so you can get mellowed out. The vocals of Jesse and a acoustic guitar dominate this song.
"Coffee Shop Theme Song" features a mandolin and an up-front bass track. The tempo quickens as the song progresses' much like a coffee buzz. The more you drink the faster you function. A cool U2 guitar like riff kicks in about 3/4 of the way in, topping off the song much like chocolate flakes on a caffe' mocha.
The intro of "Renaissance Man' is just great. The keyboard and guitar sound great together. The sound is melancholy and rather retrospective. Obvious references to the 80's can be made but the band still manages to sound unique and really rocks out on this song. "Renaissance Man" is my fave song on Aurora Borealis.

"Aurora Borealis" is definitely of the most innovative albums I've reviewed so far.
I'm impressed by the many unique and different sounds Yesterday Vs Tomorrow creates on the CD.
"Aurora Borealis" is sure to please 80's new wave and alternative rock fans alike. 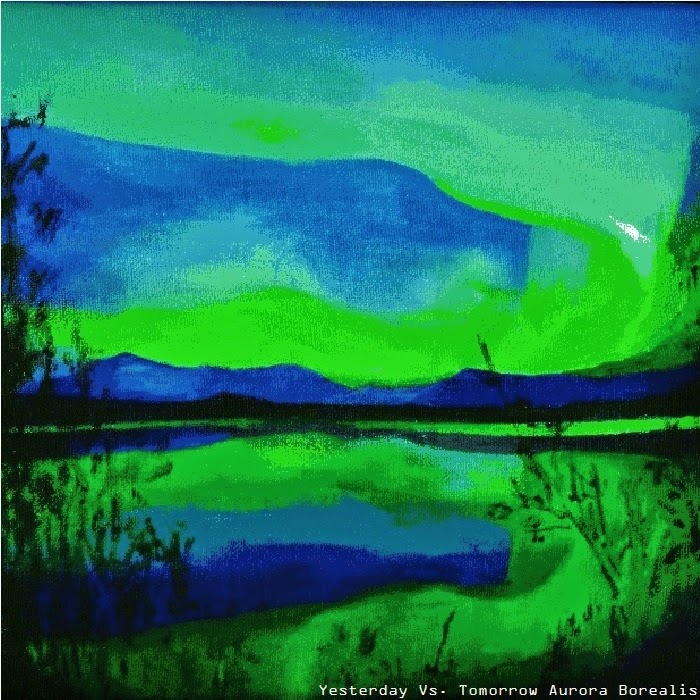 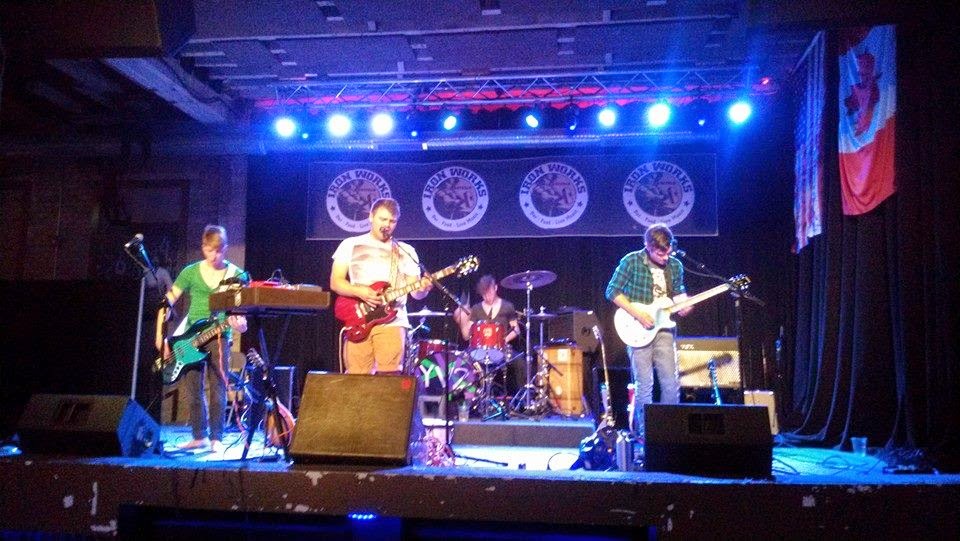 Special thanks to Jesse and YVT.
Posted by Joe Tell's Music Blog at 12:36 PM No comments: Links to this post

Ian McFeron tours in support of his album "Time Will Take You", recorded in Nashville and produced by Grammy nominated Doug Lancio.  McFeron is joined on stage by longtime friend and musical accompanist Alisa Milner on fiddle, cello, and harmony vocals.  In the Spring and Fall of the last five years, McFeron has scheduled a ten-week tour performing over sixty shows across the nation.  This will be McFeron's ninth national tour.

Themes for "Time Will Take You" were taken directly from McFeron's own touring experiences performing up to 170 shows per year across the United States.  The album maintains stout-hearted positivity while exploring themes of troubled times, hard traveling, and a thin pocketbook.  Fans of John Lennon, Bob Dylan, Paul Simon, and Jackson Browne will feel at home in his music.

Praise for Time Will Take You

“With a jingle of tambourine we get a likely candidate for album of the year – simple as… Soaked in California sunshine one minute, then deep in the dustbowl the next, it’s like a greatest hits of everyone you like.”
- Rudie Humphrey, Americana UK, May 2013

"By diligently listening to Ian McFeron's 7th album, it is a mystery that he is not signed to a major label, although he is mentioned in the same breath as both Bob Dylan and John Lennon....."
-Hans Bloom, Dalademokraten

"McFeron is a wordsmith of quality who seems at ease with acoustic guitar or piano..."
- Blues Matters, August 2011

'Ain't Dead Yet' could easily be a great lost Dylan song from the mid 1960s or more likely a brand new Justin Townes Earl Song - it really is that good."- Maverick Magazine, July 2011

"...You don't have to know about Ian McFeron's background to know that these songs were all probably written in cheap hotels in the middle of the night, and history tells us that's where the best ones come from..."
- Alan Harrison, Maverick Magazine, UK

"Seattle duo pays frequent calls to S.A. That's a good thing because McFeron is a fine singer and songwriter, an alt-folk/rock/Americana performer who strikes a cool balance between the mellow and the edgy."
- Jim Beal, San Antonio Express, 11/25/10 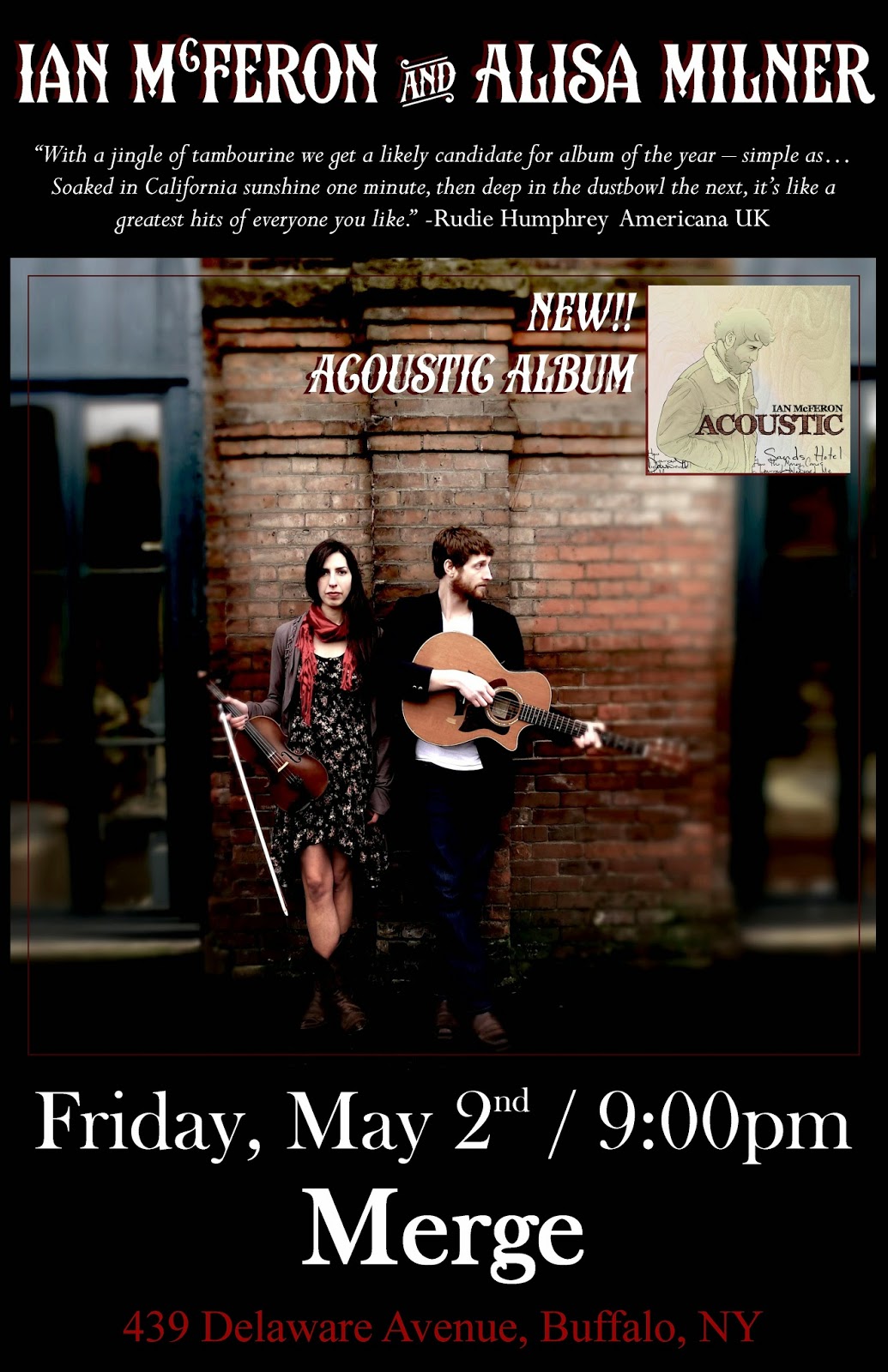 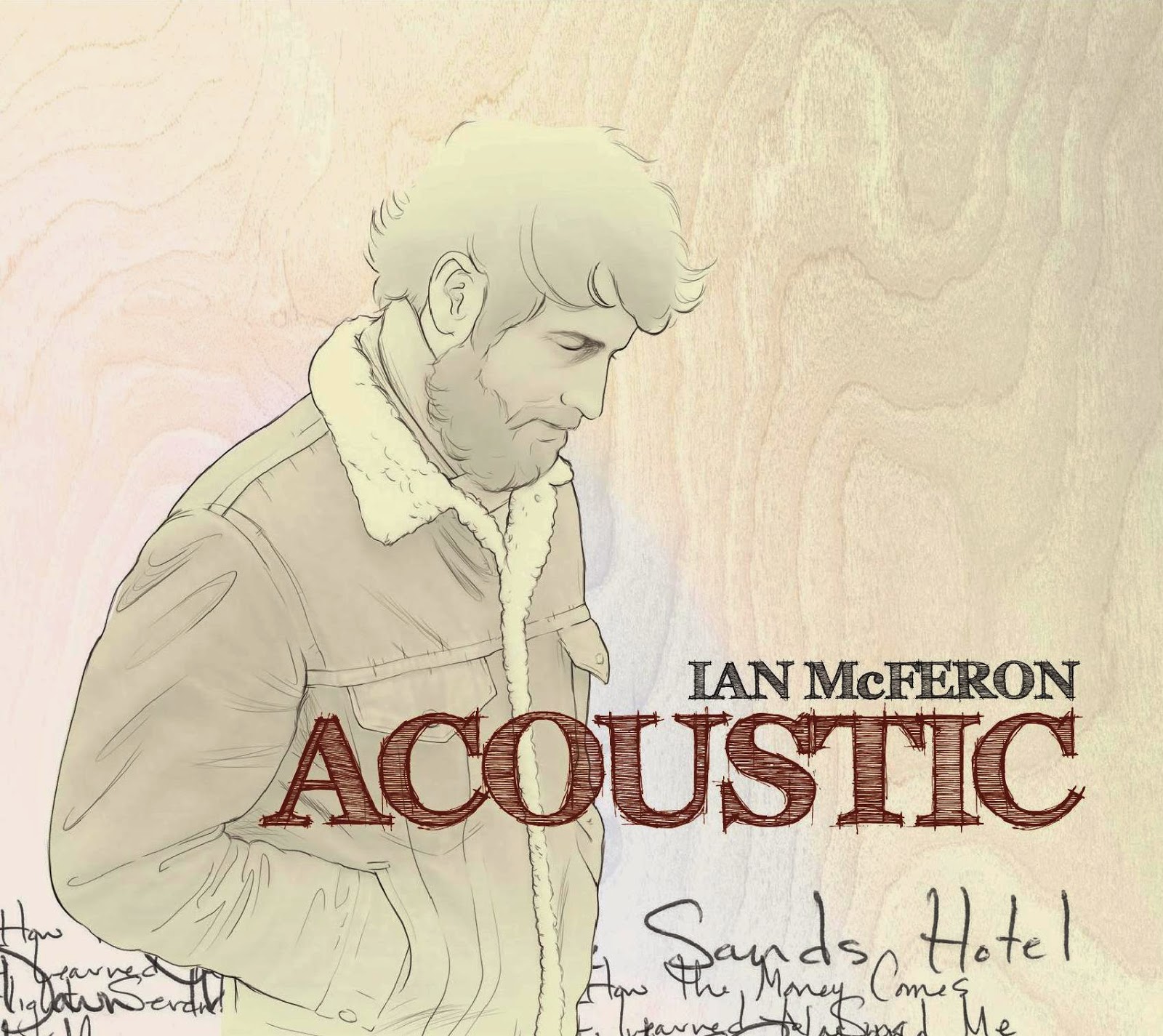 Big News!  The Acoustic Album is now available - and for a limited time (until May 1st), we are offering the album at a discount price, free shipping, AND Alisa and I will sign and personalize the album to you (or someone special).  The album, recorded at Studio Litho in Seattle by Chad Brown, features fresh new acoustic arrangement of six previously recorded favorites along with intimate performances of four never-released songs.  You can listen to the album here: http://www.ianmcferon.com/Acoustic_Album 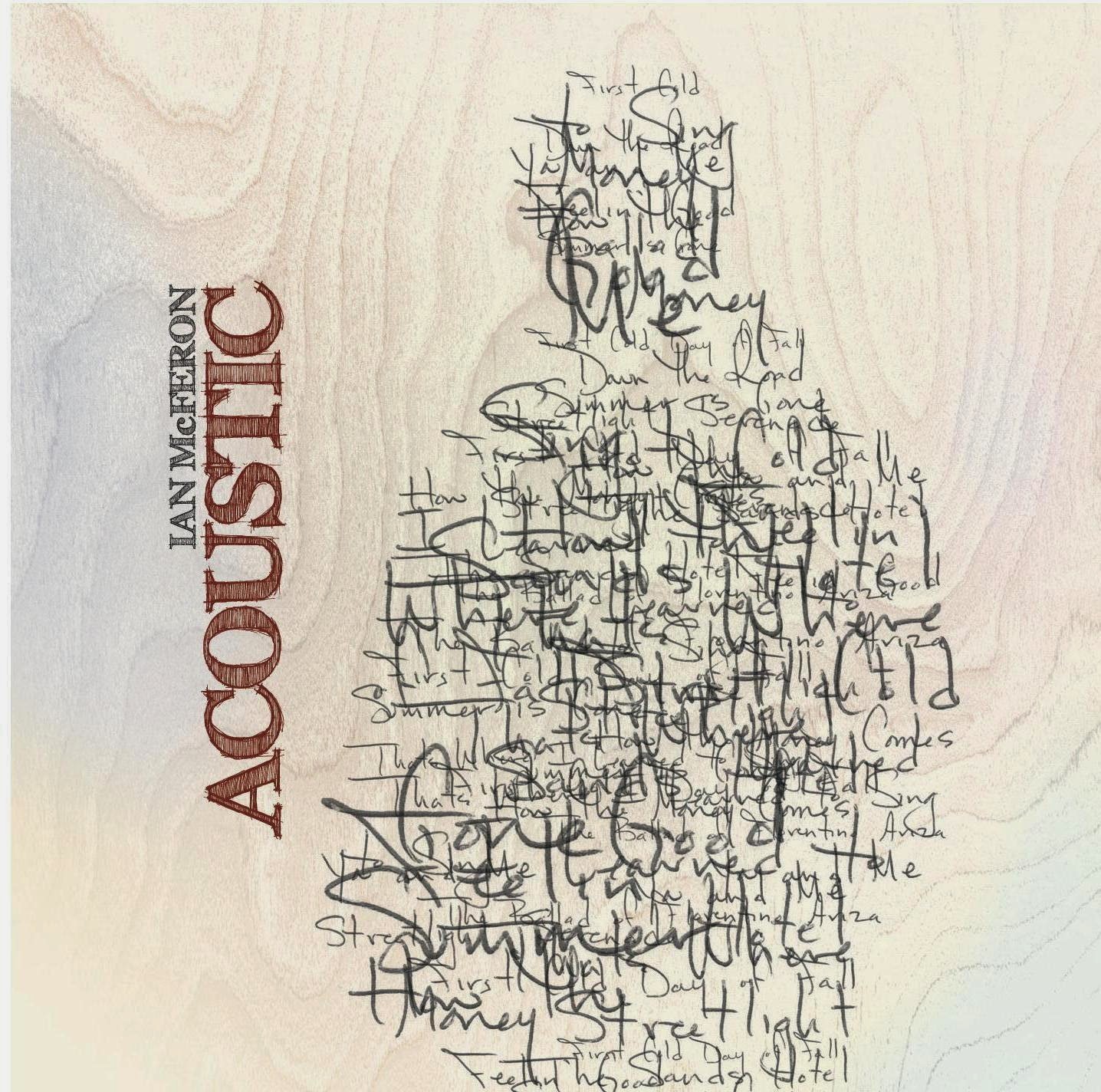 2013 Time Will Take You release 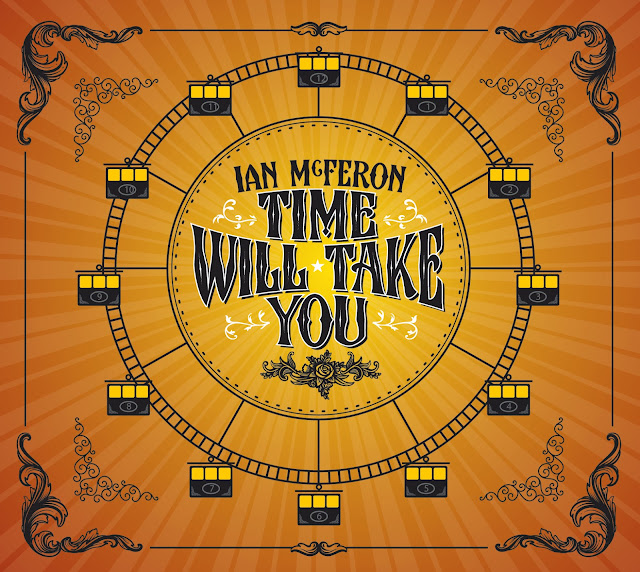 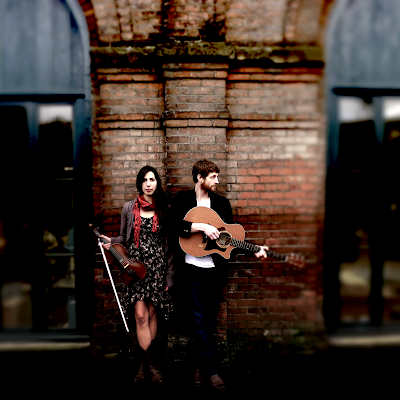 Ian McFeron broke into the Seattle music scene when discovered by “The Mountain” in Seattle (AAA-formatted KMTT at 103.7 FM) shortly after releasing his debut album, Don’t Look Back (2003). Within months, the first single “Love Me Twice” edged out songs by Modest Mouse, Bob Schneider, The Bo Deans, and Ray LaMontagne in The Mountain’s “New Music Throwdown,” a weekly competition where listeners vote for their favorite of two new songs. Ian has shared the spotlight with international and national artists such as Patty Griffin, Nanci Griffith, Shawn Mullins, Brandi Carlile, Amos Lee, Sister Hazel, Mike Doughty, Hayes Carll, Missy Higgins, Julia Fordham, The Hothouse Flowers, and Jars of Clay.

A prolific songwriter whose lyrical prose and fervent work ethic has drawn comparison to Bob Dylan and Ryan Adams, Ian McFeron has released a steady stream of albums: Don’t Look Back (2003), A Long Way To Freedom (2005), Fistfight With Father Time (2006), Let It Ride (2007), Love Me Blue (2009), and Summer Nights (2011). His seventh, full-length album Time Will Take You (released April 2, 2013) was recorded and mixed in just two weeks at Studio G! in East Nashville, TN. Produced by Doug Lancio (Grammy nominated producer for Patty Griffin), the album features musical performances by Lancio as well as Ryan Adams and the Cardinals’ drummer Brad Pemberton and pedal steel player Jon Graboff - as well as Nashville-based piano and organ player Micah Hulscher and fiddler and harmony vocalist Alisa Milner, and bassist and harmony vocalist Norman Baker, (both from McFeron’s road band). 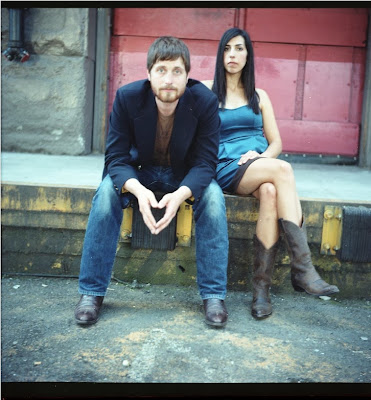 From the beginning, McFeron dedicated himself to building audiences the old fashioned way: on the road. Traveling from city to city, state to state, nation to nation, McFeron performs an average of 200 shows a year spread throughout the United States and Europe, inspiring listeners with his beautifully crafted songs and honest narratives. On the road, McFeron is often joined by Alisa Milner, a Texas-style fiddler, cellist, and harmony vocalist and long-time friends Norman Baker and Mark Bateman on bass and drums.

I'd like to thank Ian and Alisa for taking an interest in my music blog, Thank You! 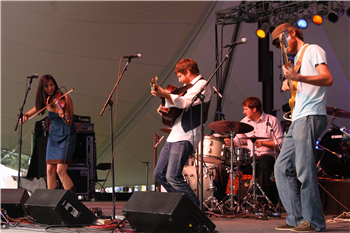 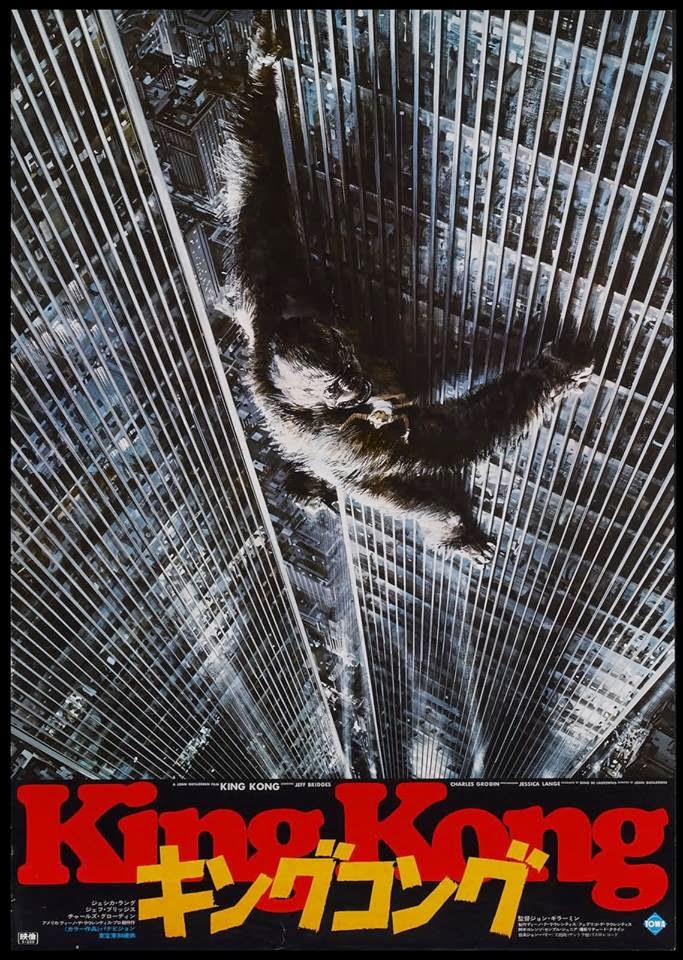 Posted by Joe Tell's Music Blog at 3:51 AM No comments: Links to this post 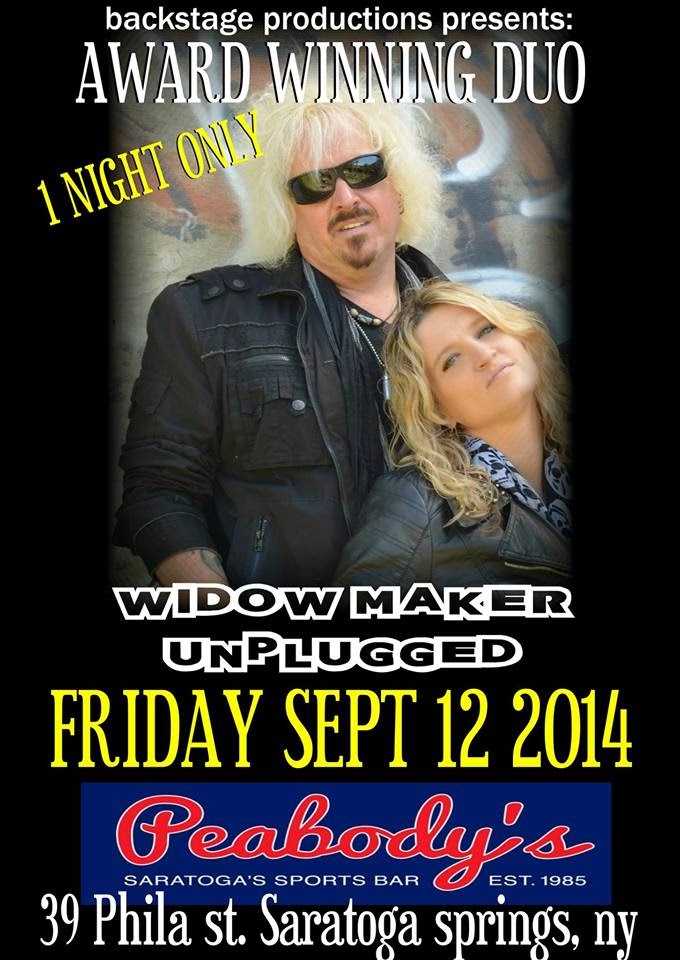 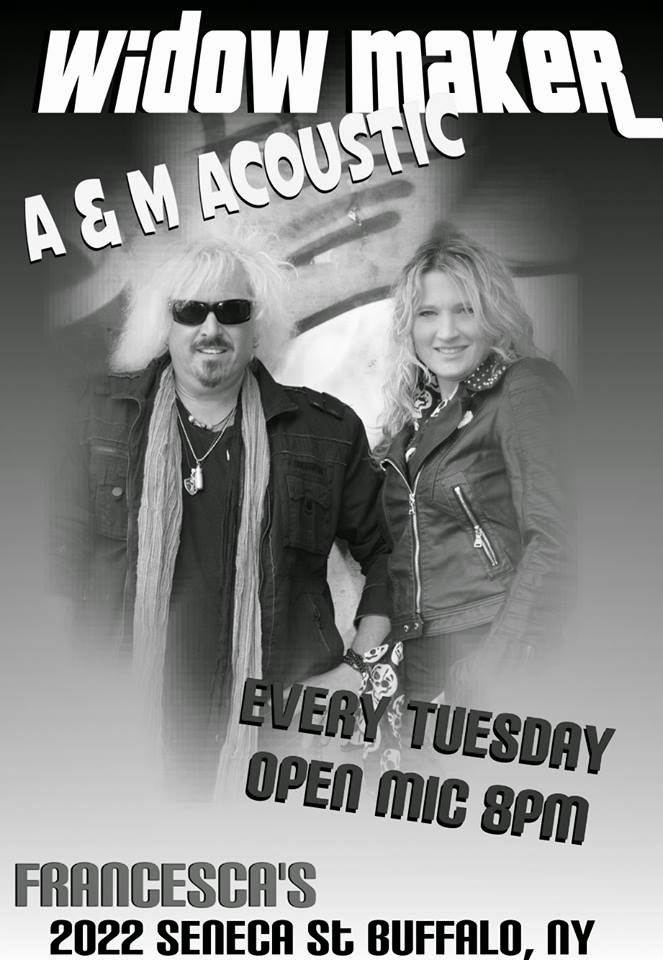 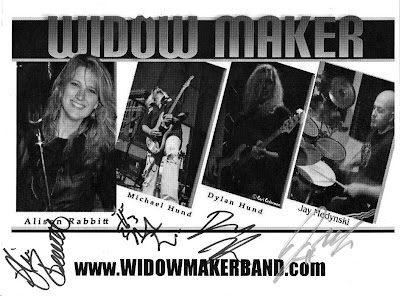 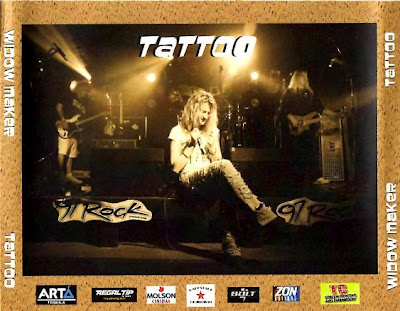 Goto www.widowmakerband.com to find when and where Widow Maker will be playing next, when you go to see the band perform ask the band how you can pick up a copy of "Tattoo".

Posted by Joe Tell's Music Blog at 9:29 AM No comments: Links to this post 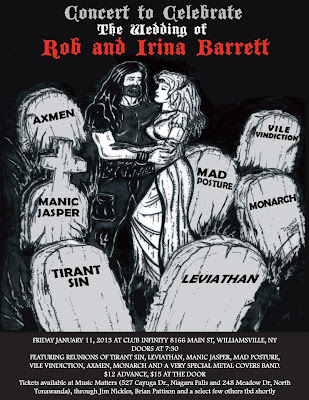 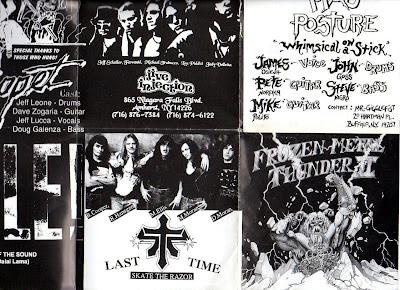 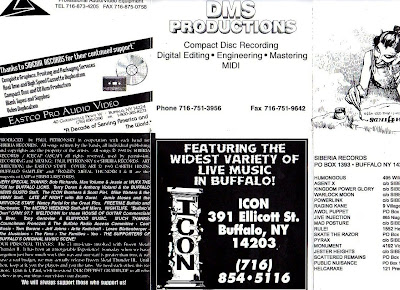 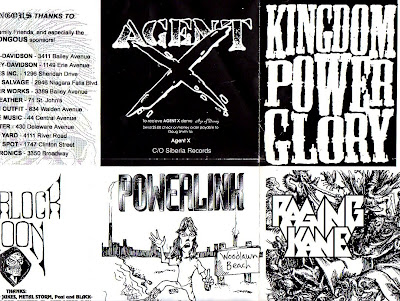 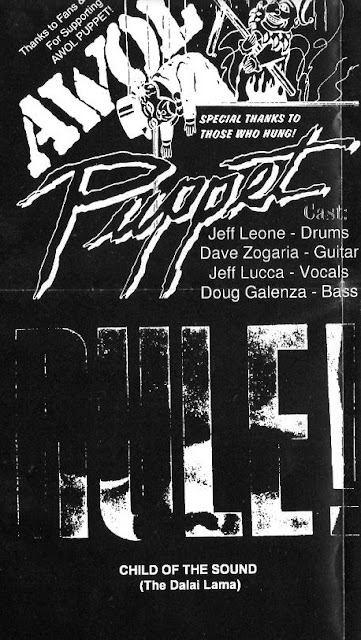 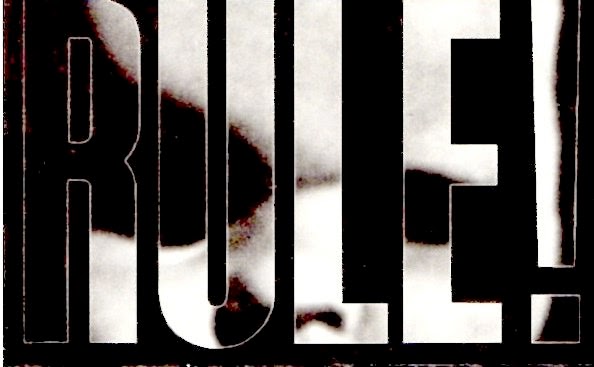 Posted by Joe Tell's Music Blog at 11:46 AM No comments: Links to this post 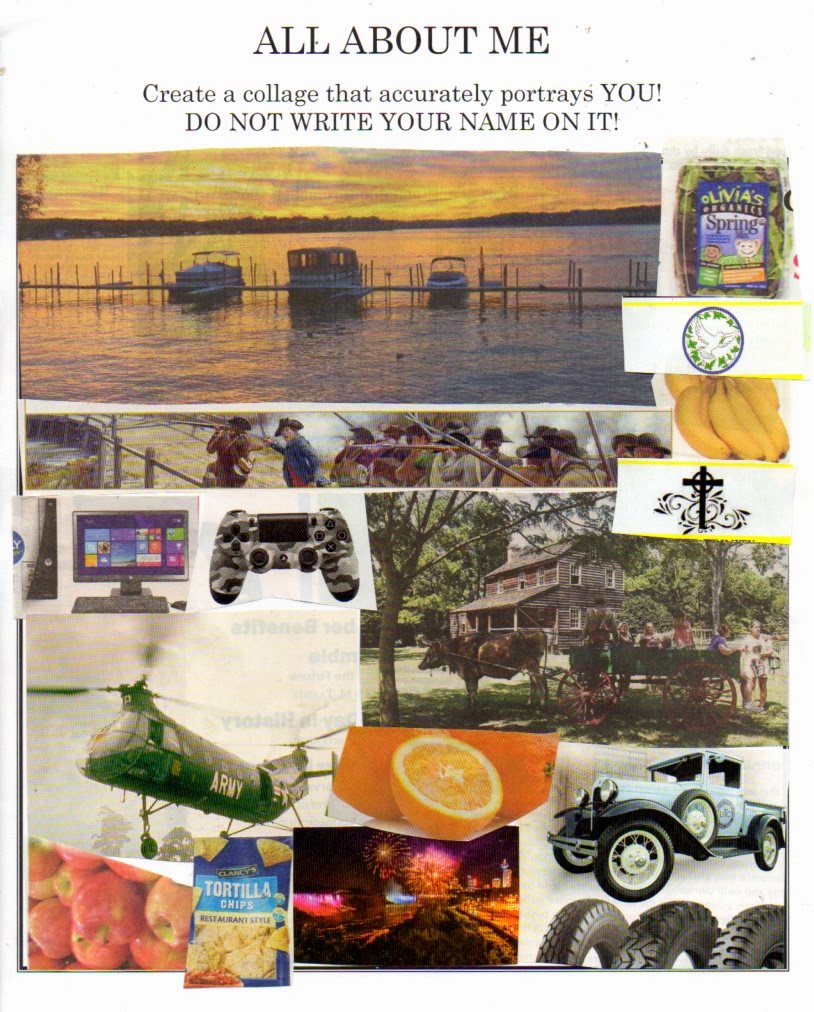 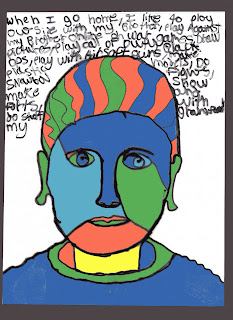 I really like this painting my son did in school, it reminds me of something from the 60's that Peter Maxx may have painted.
Good Job, Joey!
Dedicated to my son, Joe M.
Posted by Joe Tell's Music Blog at 4:44 AM No comments: Links to this post